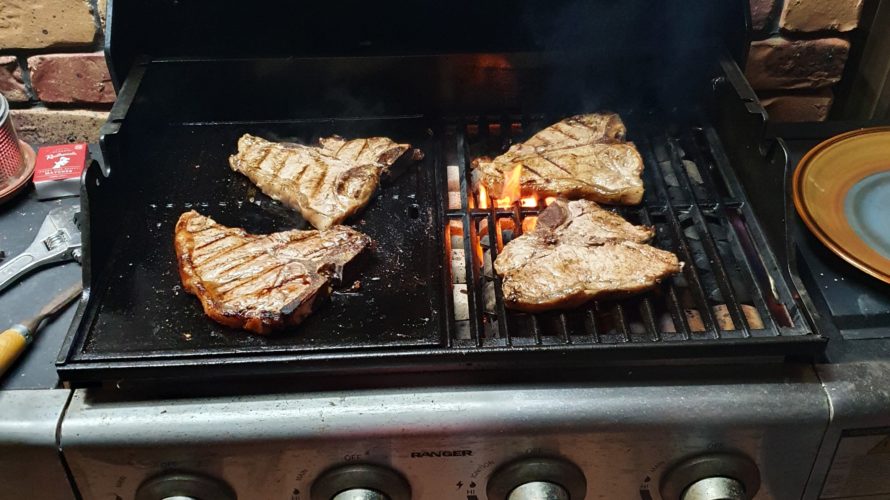 Speaking of summer in Japan, there are quite a few people enjoying the ocean, festivals, watching fireworks, and socializing whilst cooking food on barbecues. When I was a student in Japan, we gathered together and had a barbecue several times on the beach and Kawara (river beach), but for the Japanese, is it a summer tradition? Also, when I returned home for a summer vacation, I used to barbecue in the garden. When you have a barbecue, even if you buy cheap meat, it tastes amazing like high-class restaurant meat. It is also necessary to have grilled rice balls with soy sauce fragrant, and enoki mushrooms with ponzu sauce. However, the drawback of the Japanese charcoal barbecue is that preparation and cleaning up are time-consuming and difficult.

In that respect, the Australian barbecue uch better!
Because most of them use gas, you can ignite immediately with the push of a button. Cleaning up after baking is not as difficult as with charcoal.

So, today I will talk about barbecuing in Australia.
A barbecue is referred to as a “Barbie” or simply a “BBQ” in Australia. They barbecue regardless of the season. Even ordinary houses have barbecue stoves, and it’s common to invite friends to have a barbecue or have a family barbecue for lunch or dinner. In addition, many families living in a unit have a BBQ on the balcony. I’m sure that there may be barbecue stoves at the same rate that people living in Osaka have a TAKOYAKI (octopus balls) machine. Even small apartments have a place for a barbecue in a communal space. How much do Australians like the barbecue?… A LOT!
By the way, here is a BBQ 👇

What a surprise! BBQ facilities are installed in parks and beaches, and anyone can use them for free. Unthinkable in Japan 😱
So here it is 👇

So what are the essential ingredients for a barbecue?
In Japan, they are rich in variety such as meat (usually thin slices of beef/pork/chicken, sausage, steak), seafood (scallop, oyster, prawn, fish, etc), mushrooms, and vegetables (cabbage, corn, onion, bell pepper, pumpkin, etc) but it is a little different here.
When I home stayed in Australia as a student for the first time, I was told that “Today’s dinner is a barbecue” and I was happy. However, the dinner was only sausages. I still remember that “Eh? where is the BBQ, there is no meat😭???”
Yes, sausages are very very popular for the BBQ here. It is often called a sausage sizzle. Of course, when there is more than just sausages on the menu, there are many kinds of steak cooked on the BBQ such as T-bone steak, rib eye, scotch fillet, etc. Vegetables cooked on the barbie are basically onions and mushrooms. There is often a side serve of salads rather than cooked vegetables. Rarely seafood is used!

This is a BBQ dinner at Dad’s house👇