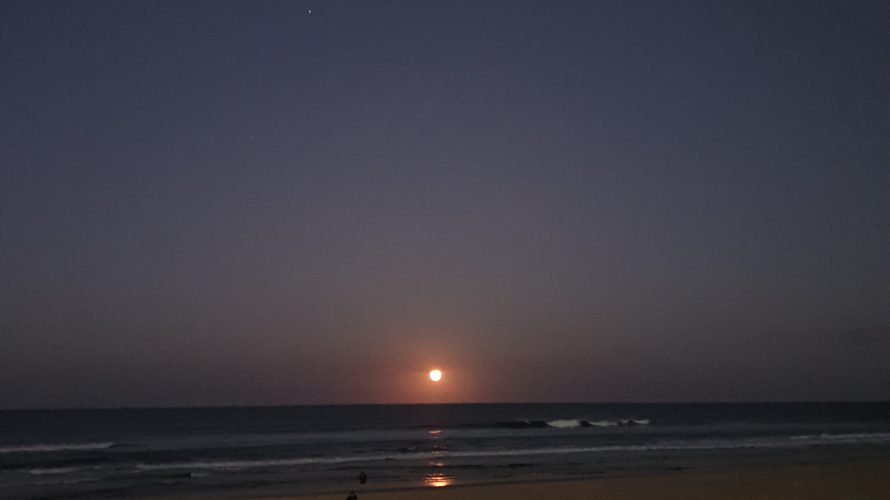 This month’s full moon has come. It was very cold and gave me even more of a wintery feeling, but I walked down to the beach anyway. In Japan, August is very hot in midsummer, but in Australia, the seasons are exactly the opposite, so it’s midwinter. But compared to Japan where I live it’s not that cold, still I’m not good at winter 💧

Now I will introduce the full moon of this month.
This month is “Sturgeon Moon 🌛”. In North America, it is said that a fish species called sturgeon reaches its maturity every August and it was the best time to fish for it. By the way, in Japanese, we call the sturgeon “chouzame (shark) “, but it is not actually a shark. The physical characteristics and ecology of sharks differ in many ways. Sturgeon is also known as caviar fish. Even if you don’t know the name of sturgeon, when you hear caviar fish, there are many people who say “Ah~ I know it”. In general, caviar refers to loosened sturgeon ovaries, but in many Western countries, it is sometimes called caviar as a generic term for fish eggs. Even in Australia, “ikura (salmon roe)” is called caviar.

This time, it was soooo beautiful that people around me cheered “Wow” when the full moon appeared out of the sea😊
This is the full moon photo 👇

Here is a koala statue🐨 admiring the full moon 👇