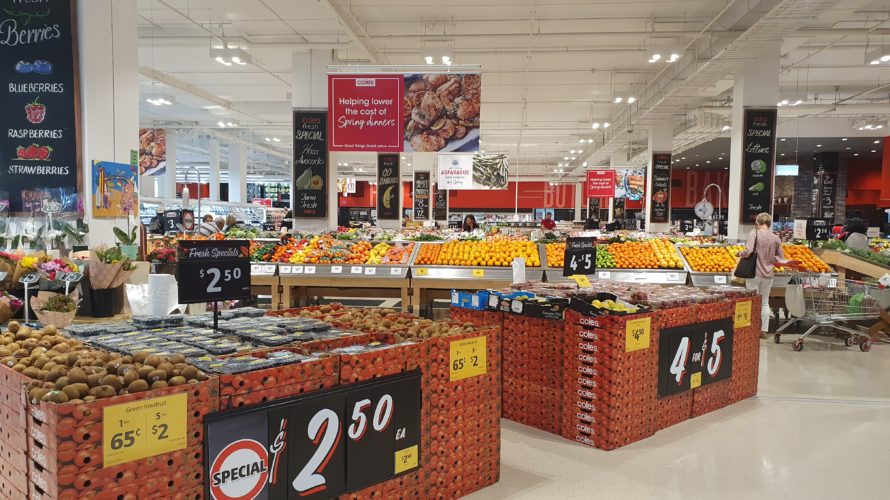 Today I would like to introduce you to an Australian supermarket!
When you go shopping, most of Australians go to “Coles” or “Woolworths”. These are two major supermarkets in Australia, and they are spread all over Australia, like Aeon in Japan. Of course, there are other supermarkets such as “IGA” and “ALDI”.

First of all, as in Japan, there is the fruit and vegetable section when you enter the store.
Here it is👇

The big difference from Japan is that most fruits and vegetables are sold by weight, and you can buy as much as you want 😋, but, some products are packed in bags, and some are bundled together. Of course, these cannot be bought separately.
Potatoes, onions, fruits, etc. are a little cheaper than in Japan. In season, grapes 🍇, strawberries 🍓, mango 🥭, etc. are unthinkably cheap. That would never happen in Japan.
As for mushrooms, japan has more variety such as enoki mushroom, shimeji mushroom, shitake mushroom, maitake mushroom, and so on. In Australia, it is just cup mushrooms 💧
Here is fruit and vege section 👇

One of my favourite things to eat is tomato🍅 by definition, it is a fruit because it has seeds. However many refer to it as a vegetable.
There are a variety of tomatoes here. Tomatoes are a little expensive compared to Japan 😭 Ordinary tomatoes may taste better in Japan.
One pack of cherry tomatoes was $ 4.70 (¥ 360) today. But the Perino tomato is sweet and very delicious, so I buy it even if it’s a little expensive. If you find one, give it a try !!
Here are tomatoes👇

Also, here are fruits and vegetables that I rarely see in Japan 👇
I have never actually bought them, and I do not know how to cook them 💧

This time I could only introduce the fruit and vegetable section, so next time maybe the meat section ???
There are still many differences between Australia and Japan, so I will introduce them little by little!
See you next time ✋😁