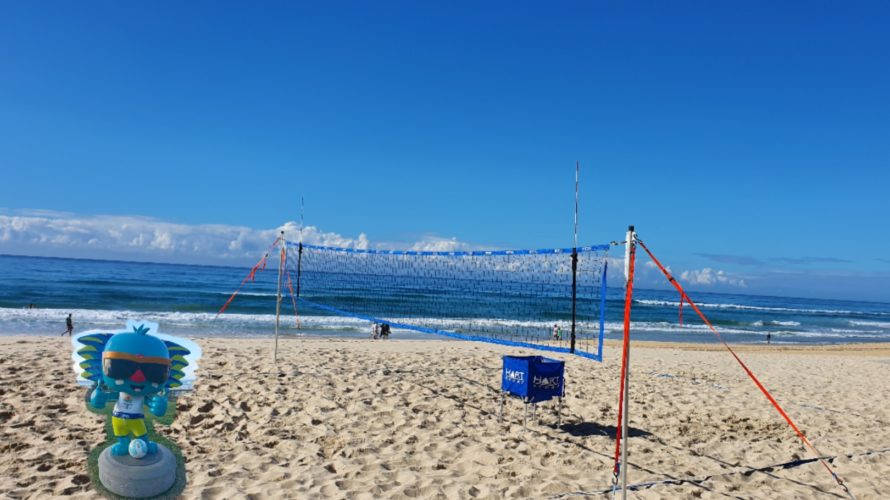 Since I moved to Australia, I’ve come to enjoy the sport of “Beach Volleyball”. Beach Volleyball was originated in the United States. In Japan, it is not popular compared to indoor volleyball, but it has been an official event of the Olympics since Atlanta in 1996. It’s very popular in Australia, and it’s a sport that can be enjoyed on the beach from the young to the old. Basically, only 2 people play in each court, but there are 4 people in each court in social beach volleyball.

I used to play indoor volleyball when I was a student, beach volleyball is similar in hitting the ball but different in many ways.
Here are differences👇

The height of the net is the same as 2m43cm for men and 2m24cm for women in indoor volleyball and beach volleyball. However, the height which one can jump is completely different compared to the hard floor and the beach. In addition, beach volleyball is outdoors, so it depends a lot on the weather. Even in the rain and strong winds, the match will be held in all types of weather except weather where the players may be harmed.  Players change the court every 7 points during the game, and it will be automatically given a timeout when both teams score a total of 21 points.

When I first started beach volleyball, running and jumping on the sand was quite physically exhausted, but now it’s so much fun. Since only two people are on the court, we have to be able to do all the receive, sets and spikes, and it’s very interesting to think about how to drop the ball where there are no people and to read the opponent’s actions. I am taller than the average height in Japan, however, here in Australia, there are many teenagers, even primary school students who are taller than me. I am very small so I focus on defence, defence and defence to win! !

In Japan, there are still only a limited number of places where you can play beach volleyball, but if you are interested, please give it a try🎵